One hundred days always feels like a bit of a milestone.  Well, it does in my head at least.  It’s not often (read: ever) I reach such a significant number of consecutive days of something.  Unless that something is “number of days I attempt to restart x habit”, in which case i’m probably a record-holder of epic proportions.  I’ve had so many new lives in terms of getting healthy etc. that not even a calculator can deal with that many numbers.

So no-one was more surprised than me upon achieving an actual 100-day successful streak in something.  I’d love to say that ‘something’ was ‘no-sugar’ or ‘healthy-eating’, and I’m now typing this in a pair of size zero shorts because the weight has melted off.  Clearly, this is not the case.  I may have achieved 100 (thousand) days of eating too much, but I digress.  Today I reached a 100-day streak of meditating!  I don’t even know what started me down this path, I think I was feeling a bit stressed so sought out a couple of different meditation/mindfulness apps to try.  Most of them give you a week or so free to try, so I tried a couple before settling on Simple Habit app, which I managed to get free for a whole month.  The layout of the app itself isn’t as appealing as that of Calm, another similar mindfulness app, but I just loved the different meditation series on Simple Habits, and a lot of them only last for about 5 minutes each (some less), so it doesn’t feel like a huge effort to get a little session in.  I loved it so much I decided to pay for a subscription, and I’ve been using it ever since. 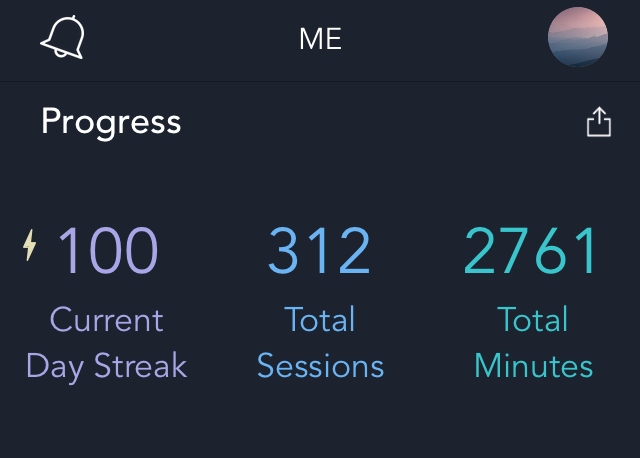 All-in-all i’ve spent on average 27 minutes a day doing different meditations, over 312 sessions!  That sounds like loads, but the amazing thing is that it doesn’t feel like it takes up a lot of time, but it’s so worth it.  Work was a bit stressful for a while a month or so ago, and it really helped just to take time to focus on a few deep breaths, and relaxing.  It’s not about trying to stop all the fast, crazy thoughts, rather it’s just about actually taking the time to notice them, and let them drift on past, and if you can’t, it helps you to regain focus much more quickly.

What’s next?  Well, I’ll keep on doing a few daily sessions, because I love them so much and can feel the benefit it’s been having.  Otherwise, life has pretty much turned on it’s head in this last week, as i’ve moved back to Scotland for work, leaving behind six happy years in Southampton!  I’ve known since the start of the year that this move was on the cards, but of course time speeds up sometimes and all of a sudden change is here, and sweeping you along with it.  I’ve left behind a lot of fabulous friends which makes me sad, and although I won’t see them as often, they’re still a bit part of my life and better come and visit OR ELSE!! Being closer to other friends I’ve not seen as much of is a fantastic bonus of course, and i’m looking forward to catching up with lots of lovely people very soon.  I have a fabulous new (rental) flat to live in, which is only a few streets back from the beach, so i’ve been making the most of that already with a few beach walks.  Work is good – a bit scary with the challenges ahead, but also exciting – and never have I been in a better position to make positive in-roads to the life I want to lead, i.e. being fit and healthy.  So i’ll attempt to write a bit more often, and chart progress.  I read so many other blogs that really inspire me to do better, I figure if I chart out some progress this will help me too. 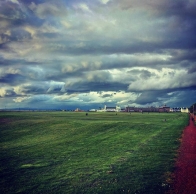