‘Self-care’ is such a buzz phrase these days, it’s almost become an eye-rolling event to dare to use it.  Yet, use it I shall.  I think life has become so busy for most of us now, they’re like dirty words you use to tell people that actually Janet, I need to take some time out for myself, so lay off me!  Poor Janet, I don’t know who she is, but she takes a lot of flack for giving everyone a hard time.

Anyway, I digress.  So after my last post, where I fessed up to being terrified that I couldn’t make the changes I want in my life, i’ve not thought about much else since. It got me to really thinking why the hell I’ve managed to achieve so much else in life that i’m really proud of, but this is the one obstacle I can’t find a way around.  Then of course you start Googling (well, I do), to see if any other weirdos out there have had the same issue.  Turns out everyone is struggling, who knew?  Okay, so not everyone, but lots of us at least.  After lots of random clicking and some reading, it lead me to the fact that our core beliefs are something that can really block us in life, if they’re of a more negative slant. Interestingly too, I find that if i’m pondering over something in life, then you seem to see it everywhere, and that’s been the case here too.  Lots of instagrammers saying similar things to what i’ve been thinking, so it helps to know i’m not mad.  Or at least I’ve got good company in my insanity.

This was intended to be a post about my core beliefs, and why I think i’ve got stuck where I am.  It would be a pretty vulnerable post, and not something I always shy away from these days, but I decided not to write everything that’s in my head.  Suffice to say, despite all the great things i’ve done, and fabulous friends and family I have that I know love me for who I am, I think one of my fundamental core beliefs is that i’m inherently unlovable, especially because of my weight.  So I KNOW that’s bollocks – logically and emotionally – but I think until you recognise a core belief and try to catch yourself when it rears its ugly head, it will always be there, kicking you in the balls. So recognising it is enough, and I don’t need to say anymore here.

What I will say is that, in realising this, i’ve been a lot happier.  Well, I was happy anyway, but it feels like a bit of a weight off, ha! If only…. 😉  So in the spirit of self-care, even though I was supposed to be away this weekend with a bunch of friends, supporting them in the Outlaw triathlon, I decided to stay home and take some time to sort my shit out once and for all.  I felt really bad at not being there for my friends, and missed catching up with them, but I needed some time to reflect and plan things and get organised. 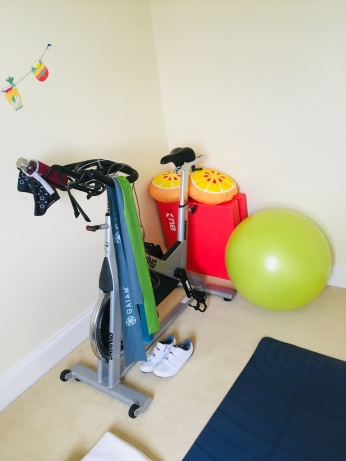 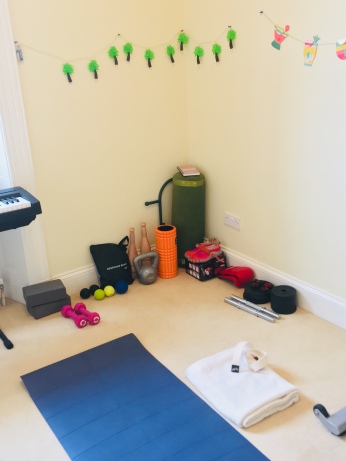 It’s been good, i’ve caught up on sleep, tidied & cleaned the whole flat, bought some dumbbells for my little home gym (see above), and got it properly sorted.  I have to say though, blowing up that bloody swiss ball is like jacking off a space hopper.  The only happy ending was the fact it did my step count no end of good… Also that cushion placement looks dodge….unintended, I promise.

A week or so ago I signed up for the Centr App, which is a Chris Hemsworth exercise thingy, though sadly it’s not full of him half naked doing bicep curls, but you can’t have everything in life.  Anyway, I wanted to just start doing something, and I can just open the app, do the workout and not have to think about anything.  I’m not doing something everyday, but i’m building it up and I have to say i love it.  It feels so good to be moving again without focussing on a race or event that i’ve signed up to but can’t actually be arsed with.  I’ve been eating much better, and i’m weirdly a loss less hungry since I had my core belief epiphany.  I’m sure eating less shit helps there too 😉  Weight is starting to shift in the right direction

So basically all I need to do now, in the immortal words of my pal Ridgeback Max is be consistent.  So far so good, so watch this space.

Follow lee the pea on WordPress.com
Join 99 other followers