At the start of September I spent a fabulous evening in the company of three good friends, drinking lots of wine, eating delicious food and just chatting the night away and putting the world to rights.  It was perfect.  The next day, we all went to watch (or take part!) in a local sprint triathlon relay, where each member of the three-person team completed a swim-bike-run before tagging the next team-mate to start their triathlon.  It was a beautiful, sunny Autumn day, and it was such fun watching everyone take part.  After my disastrously unsuccessful attempt at returning to triathlon the month before, it was really satisfying to watch others achieve their goals and just have fun.  Sometimes it’s easy to forget it’s meant to be fun! 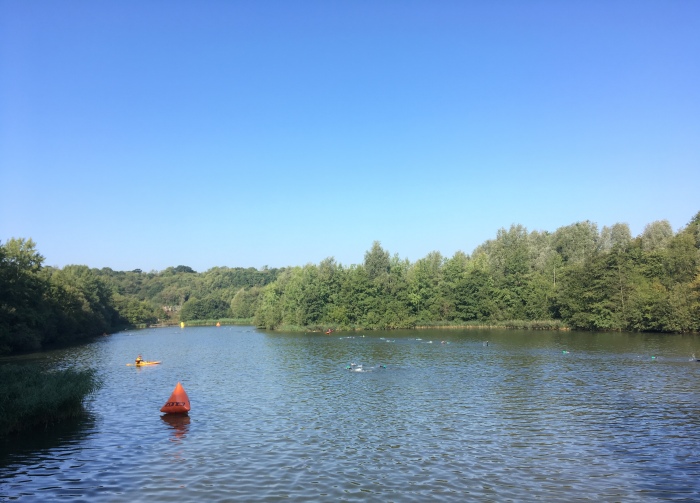 I’m generally quite hard on myself, expecting greatness when perhaps if I’m honest with myself, I don’t actually want it enough.  I like the idea of the end goal, not always so much the work needed to get me there.

However, I think everyone reaches the point they’ve had enough.  I’ve reached it a few times in the past, and realising I’d got into a bit of a rut in terms of health & fitness in the last few months (well, year), it was a bit of a wake-up call.  I’ve been successful before by quitting sugar and eating low carb (even with zero exercise), so I had to start down that path again.  It failed when I thought I could moderate my sugar intake.  I couldn’t.  Anyway, how am I to be sure that I won’t fail again?  This bothered me for ages until the simple answer presented itself: I can’t.  So I have to walk down the road anyway, even if I’m not sure whether i’m about to walk over a cliff edge in the dark.  Some risks are worth taking.  Well, I’ll carry a torch, I don’t want to be toooo stupid.

When I nailed in last year, I used this App called ‘Quit That!’ where you stick in whatever you want to quit (booze, drugs, excuses…) then it counts up from that time forward.  Initially I found it really motivating, but then if I had a tiiiiiiny bit of sugar, did that mean I had to reset (yes), or could I just pretend it didn’t count and keep going.  Guess which I did.  So long story not much shorter, it didn’t work.  However, I saw someone use another app on my new-found love (Instagram <3) called ‘My Habits’ where you basically mark each day as a success (green) or fail (red).  This is much more realistic, so as of 3rd September, I’ve been tracking a couple of things. 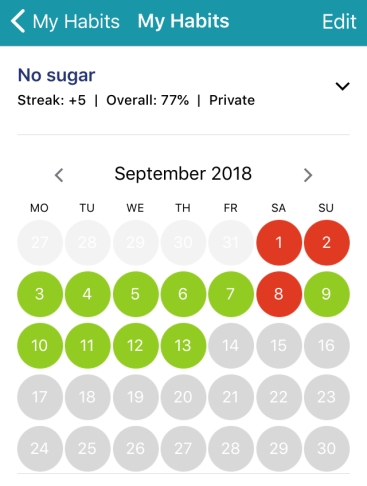 This is MUCH better.  I had a sugar-free week until a went to the most amazing surprise wedding at the weekend (not mine!  We were duped into thinking we were attending a 40th birthday surprise.  It was perfect <3), and drank what can only be described as a shit-ton of gin.  Yes, that is an official measuring standard.  I didn’t eat any of the puddings or sweets that were around, but was happy to chalk off the alcoholic, sugary nectar that is gin to a ‘failed’ day.  Then on Sunday, I just got back to it. Simple.  It feels sustainable, and so far so good, but time will tell.  I’ve been back on the low carb, cooking all my own meals and eating well, and by today’s weight, since 27th August I’ve lost 8lb.  I know, I know, half of that is probably water, but who cares, it’s moving in the right direction.

I feel so much better already for eating well again.  I’m trying to drink more water, get more sleep (failing at that though!), and just do little things to make improvements.  Day-by-day I’ll get there.  I’m not going back this time, I just can’t.  Life is too important to keep fucking up the things that matter to me, and being afraid of failing is no reason not to just plough on anyway, and do your best.  What matters is that I can be who I really am.  I’m say I’m pretty much doing that with 90% of my life, but the weight issue has been hanging over me like a fucking axe my whole life.  I want to be strong, tough and resilient physically as well as mentally, so this is why it matters.

On that front, I saw a fabulous meme on Insta that said something along the lines of “how come we can believe in Santa for like 8 years but we can’t believe in ourselves for like 5 minutes?”.  Fuck. Why is this?  It struck home.  So I set up another ‘habit’ to perfect, called ‘Days i’ve believed in myself’.  Simple and possibly daft, but actually the thought of not believing in myself is insane, and actually fairly profound when you think about it.  So here are my results so far: 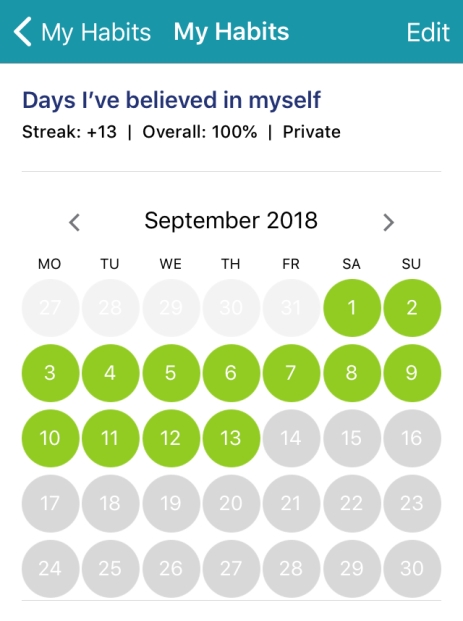 Even on the tough days, I couldn’t bring myself to say I’d failed on believing in myself, and that I’m worth it and worthy.  Fuck insecurities.  We are all worth it, and let’s not forget that.

4 thoughts on “Small steps in the right direction”